I am so happy to be working on this... we need to update our life insurance. I currently have a whole life plan I am going to do away with. We are going to get two term plans that we can adjust as needed. We have looked in to a few big name companies so far.

How have you, random readers of this blog, picked a company? What gotchas should we look out for? Don't hesitate to comment!
Posted by Chris at 10:23:00 AM 2 comments:

This past week we spent 5 days in San Juan, Puerto Rico. Those of you that know me well, yes, I ate my words and went there for vacation. That just tells you how good the deal was we found. For those who have no idea what I am talking about, I spent a lot of time there for work a couple years back. So while it is nice knowing where to go and where to eat and how to get around your vacation spot, there are certain things about the place I wanted to avoid, including thoughts of work.

We got direct flights on JetBlue, which sweetened the deal. This was my first time on JetBlue and I was pleased with them. Free first bag and no first class, so no lines of people wanting an upgrade. They do have expanded leg room rows, but they don't give them away, even at the last minute. So again less clutter. The regular rows have a decent amount of space, so traveling with an infant wasn't too bad. They don't, however, have family rows like some airlines have (i.e. you call the airline after booking and can get better seats). Each seat has an entertainment screen and XM radio, so bonus. And, free snacks and drinks, with which they are not stingy. Lastly, they take your drink order and bring it out on trays, so they keep the isles clear. So, enough of my JetBlue review.

We picked up our rental car, which even for Puerto Rico took a while, but oh well. We got a compact SUV for $85 for the week, another bonus to the deal. We stopped by the Pueblo to get some fruit and snacks for the room and it gave me a chance to show Kacey where I used to hang out and live while there for work.

Travelocity gave us a sweet deal at the Conrad. That's right. And since we are Hilton Gold, that means a free room upgrade and free breakfast. So, my expectations were pretty high of this place, even for Puerto Rico. Well, we were a little wrong. This is not a super nice hotel, but I don't want to spend my time writing about the things wrong with the hotel. If you really want to know, ask me. Just know that a fancy name and a decent location do not a nice hotel make.

The first afternoon we were there we hit the pool and the beach. We enjoyed the slide very much and also the little dolphins that spout water in to the pool. They also had a salt water pool, but it was too deep and us to take Nolan in. We walked down the Condado strip and ate dinner at Café del Angel. Our goal when traveling is to generally find the best values; so good food not marked up because of the location. We succeeded here.

Our first full day we went to visit the forts in Old San Juan. They are part of the National Park Service (one of my favorite things), so Nolan was able to get his National Parks Passport stamped twice more. We first visited Castillo San Cristóbal, the eastern most part of the fortress. We walked through the tunnels and up to the top for a view of San Juan and Old San Juan. We then ventured west to El Morro. There were a few people out flying kites on the lawn of El Morro (I have pictures from 5 years ago when many more were out). We decided to eat some lunch before our tour of the fortress. We had a small list of possible places and ended up at La Bombonera. This was a decent lunch stop and I recommend it. We walked back over to the fort and walked around a bit. We went all the way down right as a cruise ship was coming through the channel, so check out our pictures for that. Then on our way up Kacey took the circular stairs. By this time Nolan was starting to get sleepy so we walked to the car and drove back to the hotel. Then, it was pool time again! For dinner that night we ate at Hacienda Don Jose just down the street from the hotel. This is another good value place right on the ocean. 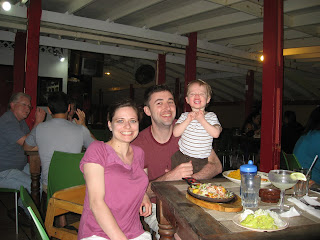 Dinner at Don Jose
On Tuesday it was time for the rainforest, El Yunque. I had been there 5 years ago on my first trip to the island but Kacey loves a good rainforest too. We decided not to do the El Yunque peak trip as we didn't take the baby backpack. We hiked down to La Mina Falls and Nolan played in the rocks for a bit. We then hiked up to Mt. Britton Lookout Tower. Both of these walks are pretty easy, but the first one does have a lot of steps. Nolan fell asleep being held on the way down from Mt. Britton so when we got to Yokahu Tower, Kacey and I took turns walking up for the view (so two sets of pictures). After our two trails in the rainforest, we drove by Lilly del Caribe in Carolina so Kacey could see the plants there. We then hit Lupi's for dinner, a place I visited a few times during my stays to the island. We sat outside and Nolan watched all the people and trucks go by. If you are staying near Isla Verde, try Lupi's.

Wednesday was pool and beach day. At this point I was having trouble relaxing (what's new) so I was looking forward to not doing anything except play with Nolan and Kacey. For lunch we walked over to Waykiki and due to their lunch specials, we got a good deal and some pretty good food. I don't think their dinners would have been such great deals, though. After Nolan got a quick nap, it was back to the beach. We did some high speed continuous shooting with the Nikon of us coming down the slide with Nolan. We also did a video now on my youtube channel. For dinner that night we met up with the Deacons at Yerba Buena Cafe. The food here was good, but just a little pricey for us (it was ok for one dinner, though). After some nice conversation with friends, we walked home to start packing.

Thursday we flew home after some breakfast. A travel note for those of you who have never flown through SJU, GO EARLY. Ticket lines are insane here, mostly because the locals show up right before their flight and then get to cut line, backing up the lines for everyone else (this is why being American Gold is nice, but we didn't fly AA). The security lines on the other hand are not that bad.

So we made it home with all our stuff, hopefully just a little more relaxed, and maybe a touch less pale.

Pictures can be found here.
Posted by Chris at 8:38:00 AM No comments:

I am thinking about getting a netbook to take to Italy with us. As the tablet we currently have will serve as TV, internet, movies, thesis writing, and phone for us, it might serve us well to have another option. I don't want to spend much money and don't need too many options as it is really a backup. (Yes, I know there is no on-board optical drive).

The Dell Mini 10 looks good, but there are a few options available in terms of video chipset and processor. I have not yet been able to find good reviews of whether these options really matter. I also like the price point.

The Toshiba looks promising as I have found a few deals online for their machine. It also appears to be upgradeable to 2 GB of RAM.

Both the Acer and Asus websites don't quite cooperate with how I want my information, so after a couple attempts, I just don't know about them. I am interested in an Eee PC, though, as this seems to be one of their better markets.

Week One of "Knowing"

So it has been about a week since we found out we are moving to Italy. So far we have meet with the 2 other students that will be living in the same city and met with the student who was there last year. We have all started talking about ideas for moving and living there. We have also started talking with all the other students who will be in Europe to determine where all we should travel. The list is probably too large...

I have also started my Italian lessons. I think the partner company will probably pay for Kacey to learn some Italian, so I am on my own. I have Pimsleur Italian. I have 90 30 minute sessions to get through. My goal is to do one every day during Nolan's nap. But as you can tell, there is no way I will be done before we leave, but it should definitely out! I have already done 3 lessons and can effectively say "I do not understand Italian", along with a few other phrases. I hope I can keep on task.

Finally on a Nolan note, last night he threw up for the first time. I mean he spit up when little, but he has never thrown up. It just so happened to be the night we had people over for dinner and he threw up four times. It wasn't violent or bile, but it still made him cry. He seems fine today and is slowly starting to eat some food. Check mark for another first for us!
Posted by Chris at 5:04:00 PM No comments: