This past week was jam packed with some firsts. While Grandma Maggie was visiting, we were given some opportunities to do some new things on the east coast.

Boston Marathon
Monday April 19th was the 114th Boston Marathon. We of course had to check out the action on what was a beautiful day. We debated how to get close to the action and while I wanted to walk the 3 miles to our meet-up point with friends, Kacey wanted to try the T. So we took the red line to Park and switched to the green-C. After waiting 15 min for our train to leave the station, we then waited another 20 trying to move but the traffic was just too bad. We determined it would be faster to walk, so we exited at the next stop and hoofed it.

This turn of events, though, led us right to the finish line, about 3 minutes before the first elite runners got there! We got pictures of some wheelchair finishers, the first woman, and the first man, who also set a course record! After 10 minutes of cheering, we walked further down the course toward Mass Ave and stopped along the way to view more runners. So while we never actually made it to the group we were meeting, we got to see some pretty good action.

Martha's Vineyard
I had been wanting to visit Martha's Vineyard at some point and luckily my mother-in-law wanted to as well. On Tuesday we drove down to Fox Hole (near Falmouth) to catch the ferry to Vineyard Haven. It only costs about $15 round trip per person. Once there, we walked around for a few minutes before catching a bus to Edgartown. Most of the island had not really opened up yet for the season, so finding a place for lunch took a bit. We ate lunch at David Ryan's Restaurant. The homemade fries and chips were pretty good. We walked around a bit, took some photos at the water, and caught the bus back to Vineyard Haven. After walking through a few more shops, we caught our boat back to the mainland.

On our way back to Boston, we stopped at Plymouth to see Plymouth Rock. There is a nice little park near by with free 2 hour parking. We walked down the shore line for a while and found Wood's Seafood for dinner.

Newport, RI
Each year Sloan holds a Gala, aka MBA Prom. Every other year it is held in Newport, RI. This year, for our 6th wedding anniversary, we went to MBA Prom at Rosecliff Mansion in Newport. Since my mother-in-law was in town, she stayed back in Boston with Nolan. So while Kacey and I have both been away from him for a night, we had never done it together. We stayed at the Inn on Bellevue. It is a nice little place. Before the gala, we walked the Cliff Walk near some of the mansions. We then drove around a few more before returning to prepare for the gala. We toured the mansion once there, enjoyed some really tasty appetizers, ate a decent meal, and danced the night away. Oh, and of course ate some yummy dessert! It was a fun evening. The next morning we drove around with a few friends viewing a few of the parks in the area. Unfortunately due to rain, we didn't get to walk around much. We were also able to stop at the Touro Synagogue. It is the oldest synagogue in the country and a National Historical Site.

I was looking over some old trip photos and remembered I had not even stitched a photo together from Australia. So I decided to stitch it and now I want to post some of my panos. No, they are not great. Send your tips and thoughts. 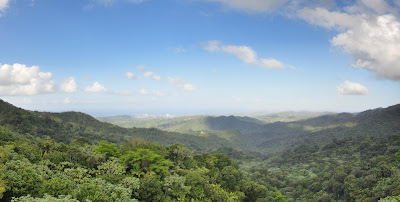 North View from the Summit

West View from the Summit

I know, evil words. We have not really let Nolan watch TV yet (he watches some sports). But, as he is nearing two, and our life is changing, I feel we may need to find a couple good shows for Nolan to watch. While we understand Nolan and he understands us, he is not really putting words together yet. Every baby is different, but our situation is we will be soon living in a country where he will not hear English except from us. So, it is time to find a couple good shows that we can buy on DVD and take with us.

We don't want just any show. We want something relatively simple with hopefully real or animated children. We want him to learn, but the show doesn't need to focus on learning so much that it isn't fun to watch. We mostly want him to hear kids speaking English. Some singing would be nice too.

So far I still love Sesame Street. My friend Matt mentioned that he watches Caillou with his daughter and so far I like this show too. I am looking for recommendations of a few shows that we can take with us (or watch on the SlingBox). Don't hesitate to leave a comment with your thoughts and why!
Posted by Chris at 5:55:00 PM 4 comments:

A Big Step for Nolan

Today Nolan and I were at MIT for an event around lunch. The room we were in had many steps and Nolan wanted to run around. The steps weren't huge, but they weren't tiny steps either. As if he had been doing it for weeks, he quickly and confidently stepped right up them without any help and then turned around and came right down them without any help. I was excited!
Posted by Chris at 5:08:00 PM No comments: