Sorry I missed the ten month update, but we were in the middle of our move. He has grown up so much since the last update, so here we go.

19 lbs
28.5 in.
He takes steps! To this point, he has evaded the camera during his walking time.
Says mama and dada occasionally.
Hair is finally starting to get long in the back and is still blond.
His personality is really starting to show. Nolan is very goofy and fun to play with during the day.
He is starting to get ticklish.
He loves to climb on stuff and is trying desperately to climb on the couch.
He claps. When he first started clapping he would do it when he was mad. Then he stopped for a few weeks. Now he claps when happy.
He loves to "read" books. Sometimes he will stop playing, crawl to his room and start flipping through books. It is very cute.
He eats lots of food including spaghetti, bell pepper, potatoes (sweet and white), lots of fruit, green beans, zucchini, squash, crackers, bread, and what ever drops on the floor.
We had to call Poison Control for the first time. He ate a little deodorant, but is fine.

April pictures are posted on http://www.chrisandkacey.com/Nolan. May should be up soon. 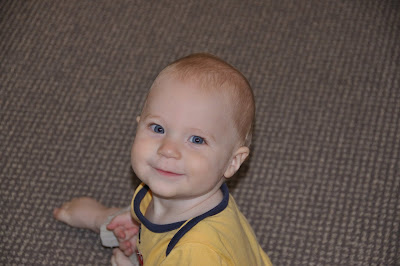 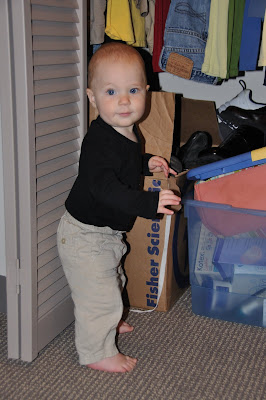 Just Trying to Keep Up

So the past week or so have also been pretty interesting, especially that last few days.

Kacey started school last week. We had a few get-togethers with her classmates and it was nice to meet them. There really is a great group of people in this program. Also, June 4, 2009, Nolan gave us his first intentional, successful step! At the end of May, we got a successful step, but I really don't think he meant to or understood what he did. He has been very close to walking for a while now and this was a "giant leap" for our little man. As of today, a few times I got him to put a couple steps together and both Kacey and I got to witness it. I will give an eleven month Nolan update later this week, hopefully with a video of his walking action.

On the job front, I received a good offer from a great company based out of Cambridge. Unfortunately, we don't have daycare, and daycare for young ones is very hard to come by around here. After much deliberation, praying, and reviewing the details, I have decided not to work at this time. This is huge as we will now have no income during school. I know I will not regret this decision, but it is still hard to make the decision especially since I have been offered a great job. Family needs are much more important and I am going to take care of those for now. We will have to wait to see what the future holds.

Lastly, on June 5th we received and accepted an offer on our house! This is great because we know and trust the family who desires to buy our home, and I have been told they are excited for the opportunity. Now we have to survive two home inspections and then we can sign it over. This helps our current (lack of) income situation because we will not have to be making two large payments every month.

Thanks to those that read this who have also been praying for us. God is working in interesting ways now and I am just trying to hang on for the ride without going crazy.
Posted by Chris at 7:36:00 PM No comments:

Reason for the Lack of Posts

So I have not posted much this year except for Nolan updates. Here is a brief update of what went on this spring.

March - Kacey got accepted to the MIT Sloan school as a fellow in the LGO program. She accepted! We started the process to sell our house, sell our belongings, sell my car, quit our jobs, and find a new place to live in Cambridge, MA.
April - Kacey stopped working mid-April. We visited Cambridge for an orientation for Kacey and an interview for me. We spent time visiting friends and family while continuing to sell our things.
May - I quit my job. On May 16th, we packed a moving truck with our remaining things (many thanks to all our family and friends!!!) and on May 17th, my brother and I drove from Indianapolis to Cambridge with two cats sitting in the cab. It was a long day!

So we are now living in Cambridge near MIT. Our house is still for sale, hopefully not for too much longer. Life has drastically changed in 60 days! God has provided the direction thus far and while we continue to figure a few things out, I am sure he will take care of us.

I look forward to posting Nolan updates and also updates on our new life in Cambridge. Don't worry, though, these posts will not contain the text "Go P_atriots" or "Tom B_rady rules". So far we have walked a lot of the Freedom Trail, visited Acadia National Park in Maine, and walked around Cambridge.